By Augusto Cesar San Martin.*
For the Cuban government, medical solidarity is a windfall. Monopolize its sale, a priority
For The government, medical solidarity is a windfall. To increase profits, monopolize the sale of health services is a priority of the Ministry of Public Health (Public Health Ministry).
Prevent earnings from escaping toward those who produce, it is the first purpose of the authorities. During the last year the Ministry of Public Health paved the way to bring slavery to immigration doctors opening on the island.
Special status for doctors
Working on issues of pressing irons, the government issued Decree Law No. 302 on migration states:
¨ ... With regard to the final departure from the country, the worker must apply to remove the head of the entity, and report their intention to travel abroad definitive way. 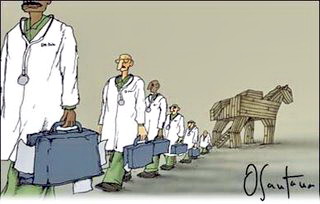 The violation of the decree, supported by the labor code, involves professional disqualification. Also provides for the suspension of benefits as health workers, Infomed, Internet, media houses as basic access to literature and other registration stamp within a period of 30 days.
A source at the Department of Immigration and Aliens (DIE) who asked not to be named for fear of job reprisals, told CubaNet.
The decree contradicts the new immigration regulations ... For us the category of final departure there since 2012.
No money, no solidarity
Another visible step to grab the medical solidarity income amounting to 8.7 million per year is the creation of a monopoly to sell medical services.
On July 1 the Distributor of Medical Services (SMC) created with Cuban capital in 2009, absorbed legally SERVIMED, who sold limited health services.
The purpose of joining a company of 25 years of creation to the SMC is to expand the marketing of seven service lines. Pharmaceutical, optical, welfare and quality of life, health borders, attention to foreign patients, academic events and technology.
The creation of the new consortium was supported by the Ministry of Foreign Affairs (Foreign Ministry). The ambassadors of the 66 countries where there are about 50,000 Cuban doctors, discussed and with foreign government des stimulation individual contracts of Cuban doctors.
Describes a report submitted by an official Cubanet MINSAP, which increased medical Angola stopped, waiting for concrete by the Angolan party discourage hiring private individual clinical measures and institutions.
It added. Reviewing individual contracts and negotiate with the partner commitments not to individual contracts and that their procurement is through the SMC.
Promote agreements with private clinics through the SMC as a way to counter the individual contracts, or what best means to monopolize the business.
The report MINSAP direction, directs, review individual agreements and the SMC to negotiate with the other party and not allow individual contracts in public or private institutions. At least those provide high profits demanded by the government.

In cases of technical and contracted health professionals, the report makes clear that even abroad, are under the terms of the Cuban Labor Code.
Legalization of hegemony
The exploitation of health workers is described in the bad and restrictive living conditions of physicians in the countries where they are serving missions. Also in the appropriation by the Cuban government for more than 70% of the salary paid by the beneficiary government, every doctor.
To cite one example, the Cuban government gets 3000 to 4000 dollars per month you pay the Cuban doctors Brazil.
Within the island, the best picture of the depreciation of the health sector is the wage, high in the past year to $ 64 monthly. What becomes a privilege fulfill mission to Brazil in bad and restrictive conditions, at a salary of $ 400 and 600 deposited in Cuba to encourage the return.
But the return of health workers who slavery escalates. With a better view of their service, the Cuban doctors do not return with the same ideas. As the government realized, he implements what he does best, suppress ideas.
By order of the Ministry of Public Health, is withheld passport to reviewers when they return to the island, either on holiday or for the purpose of their mission.
The measure has the aim of avoiding individual contracts and violation of Decree-Law No 302, on permits to leave the country.
Despite the intimidations, the Ministry of Public Health recorded 109 Comprehensive General Medicine specialists left the hospital without respecting the decree. The number of rebels doctors down to 48 in non-specialized physicians, 29 pediatricians, 28 internal medicine, 18 anesthetists, 15 and 14 gynecological surgeons.
In this sense, the Calixto Garcia Hospital is among the most disobedient with a total of 35 doctors who left the facility without notice or requested temporary permit, and did not return.
They continue in Havana, the Enrique Cabrera hospital with 29, Manuel Fajardo 17, William Soler and Juan Manuel Marquez 14 13.
After the entry into force of the decree, until now, they were disqualified 211 health professionals. Promote disqualification records it is part of the policy of the Ministry of Public Health, according to the cited official report which blames its implementation to the provincial directors, human resources, rectors and deans.
Without the right to strike, not even express, health professionals reported double revenue to the government, money and an image of solidarity usurped Cuban doctors.
* Augusto Cesar San Martin. He was born on April 20, 1967 in Havana. It was captured by the Interior Ministry and studied Criminal Sciences Institute at the Hermanos Martinez, where he graduated. By discrepancies with the military, called permanent downward of the agency, a request that was denied for a year. At that time he established contact with the peaceful opposition and was jailed in 1994. He declared a prisoner of conscience in 1996, and his release from prison collaborated with the Cuba Press agency from 1997 to 1999. In 2006 he founded the Center for Information Jose Lezama Lima.
Publicado por EG en 7/21/2015 11:43:00 a. m.