¿Why the Cuban people haven’t Medicines?


"The reason why the Cuban people have no medicines is the American blockade"May 27 - How many times have we heard the useful idiots blame the embargo for the lack of medicines for regular Cubans in the island? Plenty of times, even though food and medicines are exempted from the embargo.

But while the useful idiots blame the embargo for the lack of medicines in Cuba, here is what Granma is reporting today: ""A consignment of 4.5 tons of serum, medicines and sanitary materials donated by Cuba has arrived in this capital of the Chinese province of Sichuan to treat those injured in the May 12 earthquake."
While Cubans living in the US and other countries have to send their sick relatives in Cuba the drugs that they need in order to survive, because none are available for Cubans who don't have access to hard currency, the Castro regime is shipping 4।5 tons of medicines and sanitary materials to China!.As I have always said, the only embargo that hurts the Cuban people is the internal embargo that the Castro brothers put in place nearly a half century ago.Nothing will change until that internal embargo is lifted.
Fuente: The Real Cuba
Publicado por EG en 5/28/2008 05:16:00 p. m. No hay comentarios: 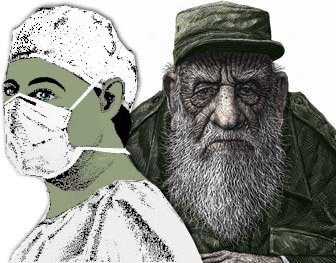 An unusual nose surgery made in Cuba.

Venezuelan woman went to Cuba for a nose surgery and returned with a disfigured face .
May 6 - Ifley Patty, a 40 year old Venezuelan woman who went to Cuba for a nose reconstruction, told Globovision that she returned with a disfigured face, a missing right cheekbone and a loss of her sense of taste.
Patty traveled to Cuba as part of the health agreement signed between the two countries, which allow Venezuelans to go to the island to receive medical treatment.
The woman told Globovision that she contracted bacteria during the operation at a Cuban Hospital.
Patty decided to make her case public because Venezuelan authorities have refused to help her.
A doctor from the state of Aragua, who is trying to help her, told Globovision that "whoever did this cannot be considered a surgeon."
The doctor said that the Venezuelan authorities have "closed all the doors" to their attempts to get help for her. "They do not want t accept these type of complaints," he said.
Patty, who used to be a model, told that she now has problems breathing and talking.
"I just want to get back to having a normal life," the woman told.
See the video made CLICK HERE.
The Real Cuba.
Publicado por EG en 5/07/2008 08:58:00 a. m. 1 comentario: Here's court records from a suit in the 11th Judicial Circuit Court, Miami-Dade County by Katy Fuller, who's father was murdered in 1960 by "Cuba's Elvis" (Dan Rather's Fidel Castro) for resisting the theft of his farm.
From The Estate of Robert Otis Fuller vs. The Republic of Cuba filed May 5 2002: "Agents of the Castro Government acting under orders of the Castro Government, led Bobby Fuller to a firing squad where he was shot and killed after being tortured by having his blood drained from his body. Thereafter, his body was thrown into an unmarked mass grave in an unknown location."
Here's another lawsuit against “One Helluva Guy!” (Ted Turner's Fidel Castro) by the family of U.S. citizen Howard Anderson who resisted the theft of his filling stations and Jeep dealership by Castro's gunmen in 1960: Anderson v. Republic of Cuba, No. 01-28628 (Miami-Dade Circuit Court, April 13, 2003). "In one final session of torture, Castro's agents drained Howard Anderson's body of blood before sending him to his death at the firing squad."
"Death to the American!" screamed Howard Anderson's communist prosecutor at his farce of a trial on April 17, 1961. "The prosecutor was a madman!" says a Swiss diplomat who witnessed the trial, "leaping on tables, shrieking, pointing, as Mr. Anderson simply glared back."Two days after his "trial," Howard Anderson's refused a blindfold — to glare at his executioners. Medically he was probably in shock at the time from the blood-draining. "Fuego!" The bullets shattered Howard Anderson's body at dawn on April 19, 1961. “Castro is very selfless and moral” reports his friend Oliver Stone.
On April 7, 1967 The Organization of American States Human Rights Commission issued a detailed report on the Cuban regime's version of recycling: "On May 27, 1966, from six in the morning to nightfall political prisoners were executed continuously by firing squad in Havana's La Cabana prison. One hundred and sixty-six men were executed that day and each had 5 pints of blood extracted prior to being shot.
"Extracting this amount of blood often produces cerebral anemia and unconsciousness so that many had to be carried to the execution wall on stretchers. The corpses were then transported by truck to a mass grave in a cemetery outside the city of Marianao. On 13th street in Havana's Vedado district Soviet medical personnel have established a blood bank where this blood is transported and stored.
Read the complete article made CLICK HERE
Publicado por EG en 5/01/2008 11:46:00 a. m. No hay comentarios: